WHAT?S IN THE BOX:

The DOVPO x Vaping Bogan BLOTTO RTA is a sizeable rebuildable tank atomizer, featuring an ingenious airflow control set up, and possesses a dual post build deck with four open terminals for larger exotic coil configurations. Formed from durable stainless steel, the chassis of the BLOTTO RTA is well-crafted. DOVPO includes a replacement tank glass, in ULTEM, to give a different look and protective qualities to the BLOTTO. In addition, the BLOTTO RTA is geared for single or dual coil configurations, making this an ideal tank for those that would like to learn how to builld. Taking design influence from an old-fashioned bottle cap, the knurling on the BLOTTO allows for easy removal of the threaded top cap to reveal the dual fill ports. The airflow system starts with the two sets of multi-holes on the knurled airflow control ring and inlets airflow below the coil layout and build deck, ventilating out to the bottom of the coil to create dense clouds of flavored vapor.

There are no reviews yet.

Be the first to review “Blotto RTA by DOVPO” Cancel reply 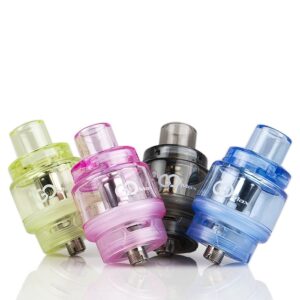